This is a guest post from sister-in-law, Liana, who is very Go Gingham! She loves good food and is an excellent cook. I always enjoy learning from her and hope you will, too.

I began making homemade yogurt 4 years ago, when my daughter started first grade.  I was paying over $2 per quart of yogurt at the grocery store and was tired of the plastic tubs accumulating in our house (at that time our curbside recycling did not accept plastic tubs).  After picking up a Salton yogurt maker for $1 at a garage sale, I was on my way.

The key to yogurt-making is the temperature.

The milk initially needs to be heated to 180-185°F, which can be measured with a candy thermometer.  Milk is difficult to heat without scorching the bottom of the pan, but gets easier with experience.  I heat on low for 15-20 minutes and stir frequently.  Watch for boil-overs!  They are not fun to clean up!  If you accidentally boil your milk, don’t worry – the yogurt will still be fine. 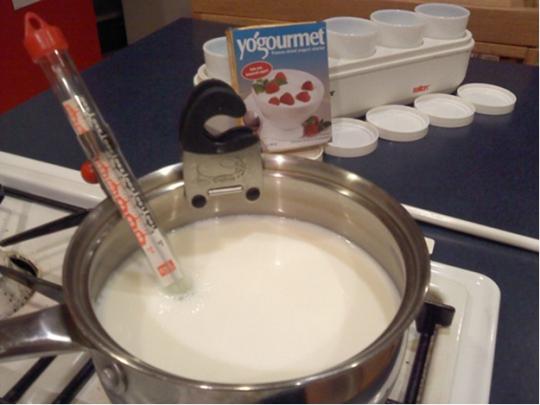 Then, the milk must cool back down to 110-115°F before adding the starter.  This temperature is measured using the spoon that comes with the yogurt maker – it has a thermometer with lines to indicate the ideal range.  It takes about 40 minutes for the milk to cool to this temperature without doing anything special (like putting it in a cold water bath).

The starter (1 freeze-dried packet or 1 tablespoon of a previous yogurt batch) is placed in one of the glass yogurt-maker jars.  A small amount of the cooled milk is put in the jar and stirred to dissolve/mix.  That jar is then emptied back into the pot of milk and stirred to mix.  The milk is then poured into each individual jar (including the one you mixed in). 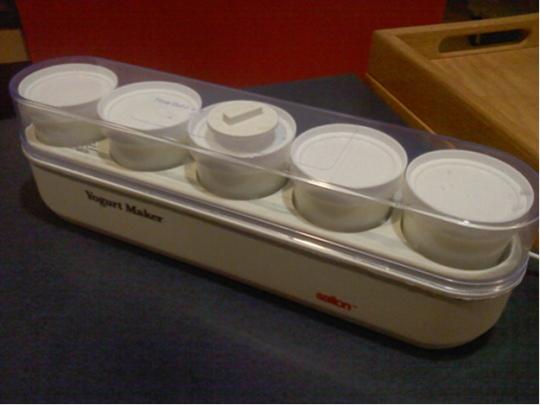 Plug in the yogurt maker, and in about 10 hours you have yogurt!  I make yogurt in the evening and it is ready the next morning.  I have found that it doesn’t usually take the full 10 hours – the yogurt will sometimes be solid in 7-8 hours.

I have successfully made yogurt with 2% cow milk (organic or non-organic), and used to make a 50/50 blend of cow/soy milk yogurt before soy got a bad rap.  One quart of milk makes five servings of yogurt, so if a gallon of milk is $3, each serving is 15 cents!  I have 2 yogurt machines and make double-batches so I only need to make it every 2 weeks, which saves me time and money!

There are a variety of yogurt cultures available (besides Yogourmet).  I have not experimented with other types, but would like to.  Newer yogurt makers have one quart-size container instead of five smaller jars.  I like the small jars, however, because you can eat right out of them without getting another dish dirty!

Because added flavorings and sugar interfere with the yogurt culture, “plain” yogurt is what you make.  I was hesitant at first because I was not fond of  plain yogurt, but the number of flavors you can add are endless!  A few of my family’s favorite serving suggestions include:  5-6 drops of vanilla Stevia; jam/jelly; honey or brown rice syrup and cinnamon; molasses and wheat germ; granola and sliced fruit; use in smoothies and in cooking.

Have you made homemade yogurt?  Have you tried different yogurt cultures or other types of makers?  What are your favorite ways to eat yogurt?

Homemade pesto – that can be made and frozen
Sour cream chipotle sauce that is an excellent dip
Grilled vegetables – on the grill – great for summer
The tangiest, yummiest BBQ sauce ever!
Egg salad sandwiches – you’ll wish you had chickens
Spicy, homemade hummus that you make from dried beans
Shrimp and quinoa salad – a summer favorite
How to roast red peppers or food you’re supposed to burn
Homemade granola – easy – made with molasses
Roasted garlic spread that’s another great dip or spread
Simple summer salad with tomatoes and cucumbers – oh, and onions and fresh dill