The majority of cooking in my kitchen is done with cast iron pans. Cast iron pans are great to cook with because they’re versatile, inexpensive, and long lasting. Cast iron cookware is my favorite for scratch cooking but it does need seasoning, which is easy to do and once the initial work is done, it’s easy to maintain the finish and requires little cleaning. Seasoning cast iron cookware is nothing more than putting a glaze on the raw metal so that when you cook with it, the food doesn’t stick.

Cast iron pans can definitely take the heat in my kitchen!

What else is great about cooking with cast iron? 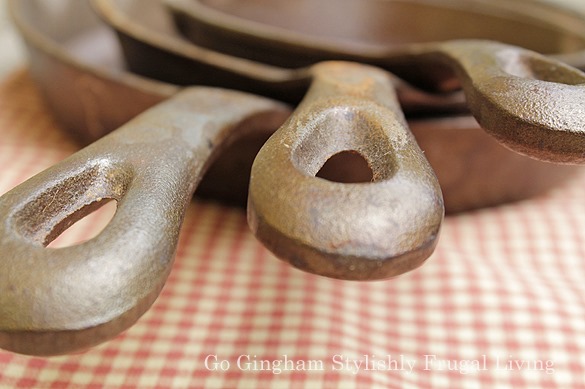 How to buy cast iron cookware:

How should you buy cast iron cookware? Used if you can find it. It’s usually plentiful at estate sales, garage sales or a second-hand store. The cost new vs. used can vary but a new skillet costs about $19.00, and the same one at an estate sale will cost around $5.00, used. I found a free set of cast iron skillets, thrown out,  on the ground, next to a dumpster. Total score!

I have even found several Le Creuset cast iron saute pans at second-hand stores. Yes, they were a bit rough, but following the methods here and giving them a good cleaning, they look almost brand new. Forget the discount you supposedly get at the LeCreuset outlet stores and buy them second-hand instead!

How to season cast iron for the first time:

Wipe oil (I use olive oil), with a paper napkin or a tissue, onto cast iron pan and place in 300 degree oven for an hour. Every 20 minutes, take iron skillet out of oven to wipe again with oil and put it back in oven. You can use a brush to do this but the napkin or tissue can really get the oil into the pan and I find that when using a brush, I put too much oil in the pan. The tissue gets composted when I’m done.

How to season cast iron ongoing:

Generally this won’t need to be done unless you have to really scrub or clean your skillet or it begins to show signs of rust. If the skillet looks dry, I wipe it down before putting it away. By “putting it away” I mean into the oven – that’s where I store mine – in the oven. When the oven pre-heats before making something, my skillet is getting a mini-seasoning while the oven heats up.

If the pan or skillet is really in dire need of seasoning or it got really scrubbed down (please note: this rarely happens!), repeat the steps above if necessary. 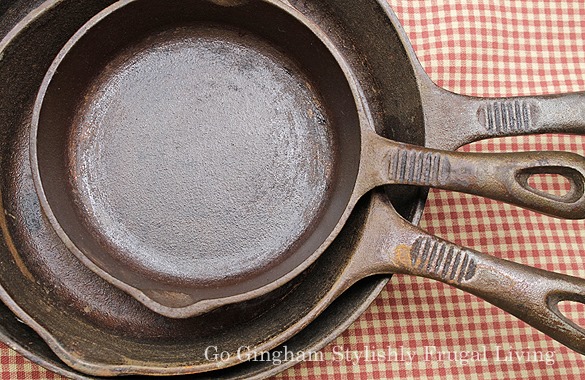 How to clean cast iron pan:

How to clean cast iron pan when food is really stuck or after cooking fish, meat or poultry:

Use metal scrubber, warm water and baking soda to scrub cast iron skillet. You may need a small amount of detergent on a sponge to get the smell out of pan but only use a drop or two of detergent. The key is not over cleaning the cast iron skillet – you don’t want to remove the seasoning you’ve worked so hard to achieve.

Letting a cast iron skillet soak with water and baking soda overnight is not desirable but sometimes that’s what happens here. (Honestly, it happens more often than I prefer!) After using a metal scrubby on it in the morning, it usually needs a wipe down with oil and then put into its storage spot – the oven! – it goes. This morning, I found the cast iron skillet that had been cleaned last night but had water left in it. This produced several rust marks. I used a clean tissue and put a few drops of olive oil on the tissue and wiped down the skillet. In no time, the skillet was back to looking clean, rust-free, and ready for cooking in. Then, I put it away – into you guessed it – the oven!

Cast iron pans are versatile, inexpensive, and long lasting and once the initial seasoning is done, it’s easy to maintain the finish and requires little cleaning. Cast iron pans can definitely take the heat in my kitchen!

Do you use cast iron? What’s your favorite shape or size pan?

New to cooking at home? Fear not!
11 reasons to meal plan every week – save money, save time and reduce food waste
How our freezer gets used – what I keep in our freezer and how I utilize the space
Grocery shopping soon? Plastic grocery bag alternatives
How to roast red peppers or food you’re supposed to burn
How to roast tomatoes freshly picked from the garden – so good!

Ree, the Pioneer Woman, cooks with a cast iron skillet – of course she does – but her’s came with a lid and was pre-seasoned. Don’t fall for the extra cost of a pre-seasoned pan now that you know how easy it is to do yourself! The lid? Now, that would be nice.

30 thoughts on “Cooking with Cast Iron”