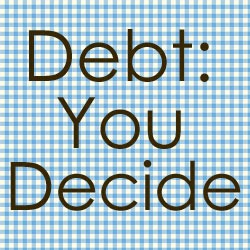 The trick is you need to decide the level of debt you’re comfortable with.  When you decide based on your knowledge and what you can afford and how you’d like to live, then you’re in charge of your debt.

Here’s an example of how you can be the one making the decision about your level of debt.

When we bought our first house back in 1990, my husband and I met with our bank to figure out how much house we could afford.  The bank told us we could afford a certain mortgage amount (not that we were making very much money) and we decided on a number less than that.  We were both 23-years old at the time, paying off our college loans, and saving for retirement.  We didn’t want to be house poor so we decided on the amount.

After we sold our first house in 1995 and moved to Portland, Oregon and started house shopping, we met with our bank to get pre-approved for a mortgage.  Again, we listened to the bankers tell us how much we could afford.  The bank said we could afford a home that cost a certain amount and we looked for a house that cost half that.

Don’t let a bank decide for you.  Just because a financial institution says you can afford something doesn’t mean you should jump in with both feet.  Take a good hard look at your finances and figure out if you can afford something or not.  Don’t let a financial institution make that decision.  That way your debt is your choice.

One thought on “Debt: You Decide”