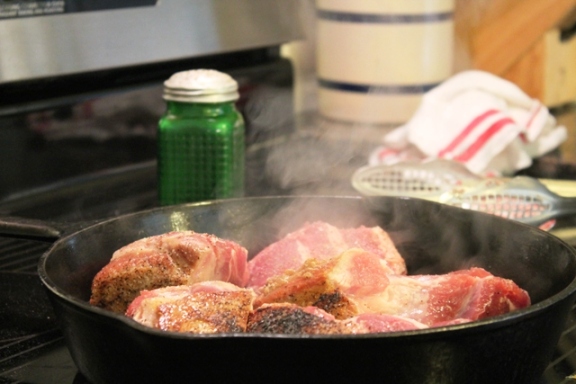 When I first began using my slow cooker, I mostly opened packages and cans, dumped them in, and turned it on. The result was less than tasty but after a long day at work, my husband and I were happy to come home to a warm meal. It didn’t taste great and was super salty but at that time, my cooking skills were practically non-existent and I didn’t know any better – or care.

I resisted pan searing my cuts of meat, first, because I’m lazy and didn’t feel like cleaning one more pan – especially since I was already using the slow cooker. Meats can really be flavor-less when cooked in a slow cooker. Somehow they’re flavor-less and dried out – even when they’re cooked in liquid.

Darn those little foodies! Of course they’re right. It tastes so much better.

Searing the meat first locks in the flavor! I have no idea about the science behind it – and there’s always science with cooking – but don’t skip this step. Your foodies will thank you. 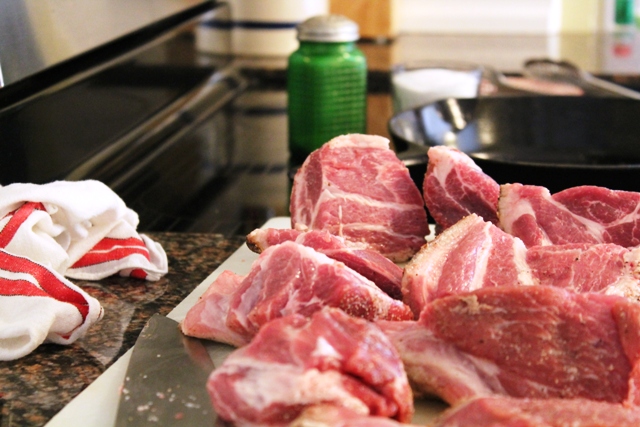 Be sure and wear an apron, too. You’ll be glad you did.

Using a slow cooker doesn’t mean meats will come out flavor-less and dry. Pan searing makes all the difference – even if we have to dirty one more pan in the process. Once again, looking for a scullery maid to do the clean up in my kitchen!

What do you cook in your slow cooker?

Go Gingham food philosophy – yes, there is one
New to cooking at home? Fear not!
Cute and clean for the kitchen: make a baking soda shaker for soaking those stubborn pots and pans
Why I cook with pork – several reasons – and one involves sweat